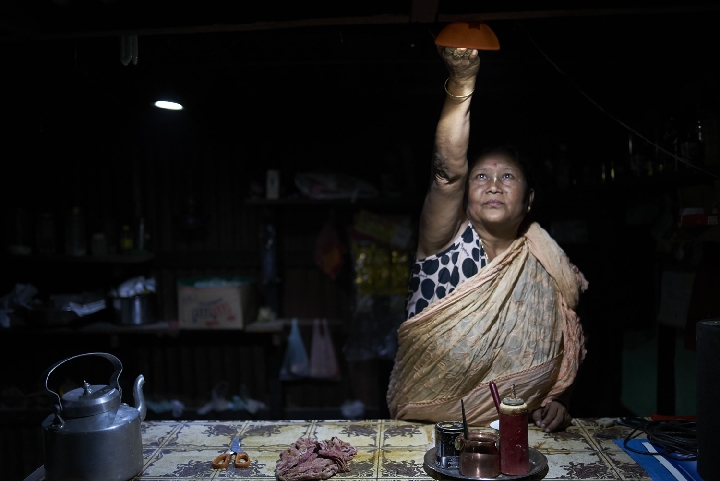 Mayanglambam Jamini
Tagline: A Shop of her own

Situated next to a small pond and a fancy gated apartment complex, Mayanglambam Jamini’s shop is not large, but has a significant presence. It is late afternoon when some customers drop by for a couple of paans. They then settle down on the narrow bench outside the shop for a leisurely chat. In this middle class locality called Sagolband Tera Sapam Leirak, most of the women are housewives, or are involved in weaving or running petty shops. She got married after completing her second year of BA. Her husband worked as a government employee on a contract basis for several years, never getting regularised, and then he lost that job as well. As they had more and more children, the financial pressure increased. He became a small time contractor, and also started going to Moreh (on the Indo-Myanmar border) for business. He would bring back different kinds of products, and she would go door to door in her neighbourhood to sell them. It was tiring work.

Jamini became a member of Chanura initially for a loan to finance their trip to Moreh. Money wise, the business was not doing too badly, but as age caught up with her husband, the sheer travel was becoming too strenuous. Their children also began to protest against these trips, and worked on dissuading the parents. Earlier the couple travelled by bus, and ended up making more profit. Now they take the taxi that offers them speed and comfort, but also eats into their earnings.
Four years back, in her second loan cycle, Jamini decided to take a loan of Rs 10,000 to build the shop. Jamini keeps her shop open from 4 am to 10 pm, and on special occasions even later. She sells tea and pooris in the morning, and paan through the day. There’s a steady influx of customers as the evening progresses. As a lot of her clientele comprises the elderly, she hopes she can have proper seating in her shop in the future. She currently earns Rs 250 per day from the snacks, and Rs 350 from the sale of paan. Making it a paan shop was certainly a lucrative decision as hers is one of the few shops of this kind in the locality.
Jamini shares how she has been regularly taking loans from Chanura for solar lamps—first Accendos, and then Mini Home Lighting Systems. She points to the solar lamp that is hanging in her shop and says, “I have used it for three years now and it has been working well. No complaints! After prepaid has come, we have been trying to minimize the usage of electricity.” Earlier she used the Accendo in the shop and the Mini Home Lighting System in the house, but now she has shifted the latter to her shop. She animatedly narrates an incident, “Once the transformer broke down for a whole month. In the whole neighbourhood, mine was the only place that was lit up. People would ask—How is your shop so bright when the whole area is steeped in darkness?” Considering that there are no street lights on that road, it is easy to imagine how Jamini’s shop would have been cheerful and welcoming in the otherwise dense darkness.
Life has certainly improved a lot after the introduction of solar. They have stopped buying kerosene and candles. The children are able to study, and her daughter who does hand and machine embroidery, and makes dolls for sale, is able to work at night now, and complete the orders. “The biggest advantage with solar is that I can keep the shop open longer into the night especially during marriage ceremonies [when there is a lot of demand for paan],” she says. “People who are not from the local area feel comfortable about coming to the shop when it is brightly lit. Girls and women also often come visit shop,” Jamini shares proudly. Financially her situation is still not very comfortable, but she is quite happy with her life now, and hopeful for the future. With the next loan, she plans to expand her business by including products like betel nuts, firecrackers, disco lights and clothes. The trips to Moreh continue, but gone are the days when she had to go door to door to sell her wares. Now she has a shop of her own!