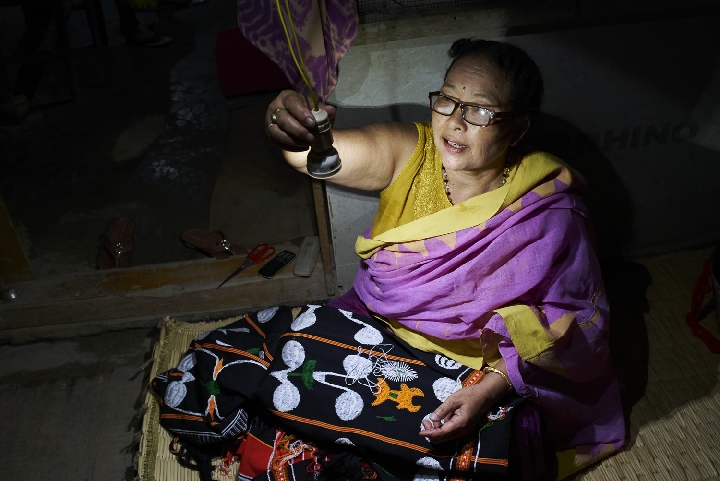 The verandah of M. Lalini Devi’s house bears testimony to her lineage in exquisite hand embroidery. On the walls are photographs of her mother, a national award winner, and her sister, a state award winner like Lalini herself. There are also posters giving information about the Shaphee Lanphee tradition of embroidery that she specialises in, and a collection of colourful shawls, stoles and bags.

Lalini lives in Imphal East in Wangkhei Yonglan Leirak, famous for the weaving of the Rani Phee. Shedding light on her tradition, she says, “Different clans do different kinds of embroidery. I inherited it from my mother, and she from her mother. [According to a myth,] a God said that the shawl should be embellished with different animals like buffalo, elephant, and elements like spear, sun, and moon. In earlier times this shawl was given to a person as an honour by the King to acknowledge his/her achievement. Now it is a necessary part of the lives of the tribal people who use it during marriages, and for burial.” Lalini got married in 1991, but tragedy struck a couple of years later when she lost her husband and new born son. She tried living at her in-law’s place with her daughter for a few years, but could not cope as there was no one to look after the child when she had to travel for work. She has been living at her maternal home for the past 16 years. Lalini’s daughter, now 24, is pursuing a course in Homeopathy in Madhya Pradesh. At present the household comprises her niece and herself. Her life revolves around her niece who she is devoted to, and of course, her work. She loves doing embroidery and has taken it up whole heartedly. She travels to trade fairs in the northeast, and also to Delhi and Mumbai.
She works out of a small inconsequential looking shed with plywood walls, but has a whole system in place. She has trained 13 people who now work for her. They tailor, weave and do embroidery. “We make shawls, table cloths, bags and cushion covers,” she says.“They are not bought by the common people as they are too expensive. It is all done by hand. Earlier we would do embroidery only on black, but now we use different base colours. [Often] I do fast and bad embroidery. There is a saying in Manipur that for the market one has to make it very fast, but it will not be of good quality,” she adds with disarming honesty.

Her association with Chanura began in 2009 when she heard that there was actually an organisation that supports women’s businesses. In the first cycle, she got a loan of Rs 5,000 to buy threads and to pay wages. Earlier she used to sell her products in the local market, but was not able to earn much, but now she has found more profitable outlets in fairs in other towns and cities, as well as in handloom houses.

Sick of being dependent on kerosene and candles because of the irregular supply of electricity, she opted for solar lamps in consecutive cycles—a study lamp, Accendo lamp, and then two Mini Home Lighting systems. Solar has been a big boon for her as using electricity is a risk for her niece who is suffering from serious physical and mental illness. Lalini explains, “We use a solar fan in the house as my niece does not like the ceiling fan. She complains that her hair flies all over the place, and she feels uncomfortable. She needs the solar fan and light on 24 hours a day.”
Sharing her dream for the future, she says, “I want to open a showroom for my clothes. My dream also includes the solar lamp! I want the path leading to my house to be lit. Now it is dark and swampy. Another thing is, we have to keep the TV on 24x7 for my niece even when she is sleeping... I wish there could be a TV that runs on solar power!”