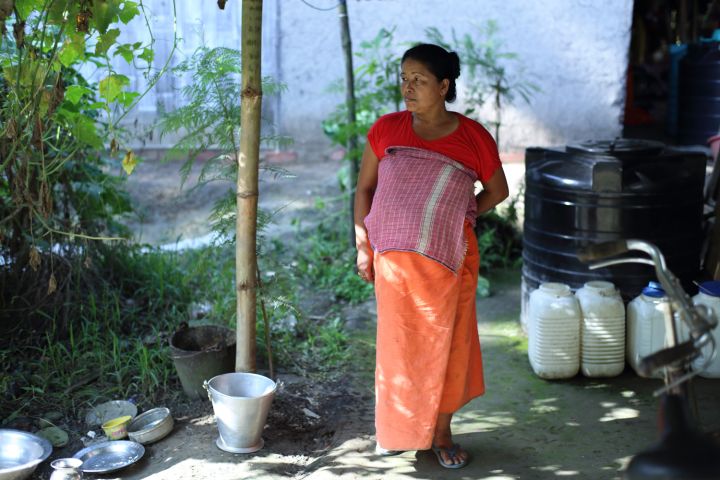 Though situated near the Imphal river, water is a serious problem with people having to buy water for drinking in the rainy season as the river is too muddy during those months. The rather sordid interior of her house is enlivened by baskets of freshly plucked green vegetables from the kitchen garden outside. The locality is Basikhong Torban Leikai in East Imphal where the main occupations are weaving and agriculture. Hemabati lives here with her husband who works as a plumber, while their only son is pursuing his studies at a boarding school near Manipur University. Hemabati grew up not far from here in Chajing in a fairly well to do family. Her parents worked on their land and had a tea stall as well. One of seven siblings, she studied only till Class 5 as girls were not encouraged to study much. Reminiscing about her childhood she says, “I did no work as a child. I did not even know how to cook. It is only after I got married that I learnt cooking.” Now, she is an extremely hard working person, with her day starting at 3 am! At 3.30 she and her husband start preparations at their small hotel located on the main road. They serve tea, poori and sabzi to people, both women and men, going for their morning walk or on their way to work. The hotel is a make shift structure made of corrugated tin and supplemented with cardboard. Just before sun rise, her husband begins to make the dough while she cooks their morning meal at home. Then she moves to the hotel for cooking, and serving the customers. In 2001, Hemabati had an accident and had to undergo expensive treatment. Her husband had to sell his auto rickshaw to pay for it, and so he lost his job as a driver. They started the hotel at that time initially keeping it open in the morning and evening. However, nowadays they cannot keep it open in the evening as Hemabati is busy with a packed schedule of cooking, fetching water, evening worship, maintenance of the kitchen garden, and other household chores. Apart from running the hotel, she also works on her own paddy field, and tends to her piggery.

It was during her work at the hotel that she once heard a group of women from another village talking about Chanura. She says animatedly, “I had heard about it before, but after I listened to these ladies, I took my bicycle and rode all the way to Kongba Irong to meet the person from Chanura and get all the information. I wanted to find out how to organise the women in my village and start a center. What I was most excited about was the solar lamp.” Hemabati had lived a long time at the mercy of an erratic electric supply, having to keep a ready stock of candles at all times with the availability of kerosene being unpredictable thanks to bandhs and blockades. Before prepaid, they had a line coming from a common connection at her in-law’s place, but it was not very useful as the light was quite dim, and there were frequent breakdowns. Hemabati took her first loan from Chanura for starting a poultry farm. Soon after, she took a Mini Home Lighting System, and the following year another one. Now they use the lamps at home and at the hotel. She says with satisfaction, “I don’t need to buy candles anymore and I don’t even have an electric connection at the hotel.” As their house is surrounded by fields and plants, they keep a solar lamp on all night at the front and back for their own safety. For visits to the washroom, and for all their early morning chores, it is quite convenient. Hemabati uses solar for her kitchen work, and also for making bundles of vegetables for sale. They earn a profit of about Rs 300-350 a day from the hotel, but they just about manage their expenses. Though it costs them Rs 50,000 a year to send their son to boarding, they took this decision as there was no one to guide him at home, and they did not want his education to be compromised. Speaking of her dreams for the future she says, “I want my son to be a government employee. I also want to open the hotel in the evening again, and serve different types of snacks including chicken.” Hemabati now is no longer just a dedicated user of solar lamps, but has been instrumental in other members of the center also taking up solar. Her genial face lights up as she says, “My friends’ children are able to study for their Board exams now, and they are thanking me profusely. When I was running around for setting up the center, my husband protested a lot asking why I was leaving the hotel and doing other work, but now everyone is happy.”