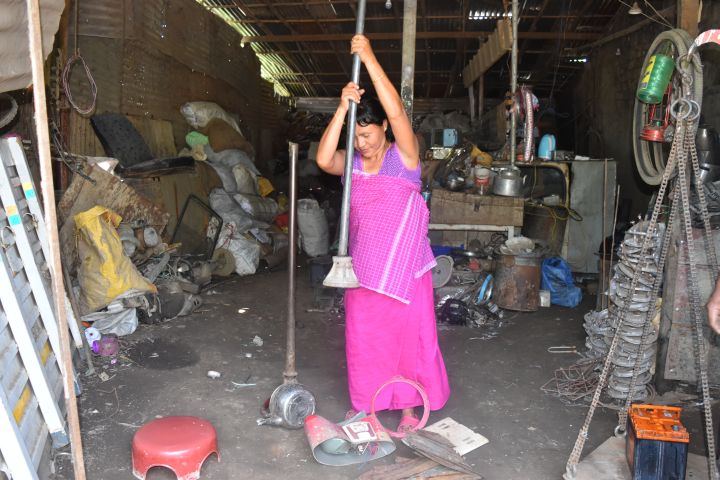 Thoibi Devi
Tagline: A vision to mold a better future

Langthabal, Imphal is one of the most strikingly beautiful places in the state of Manipur. The ancient relics make Langthabal an important tourist attraction in Imphal, Manipur. 80% of the population in this region is engaged in aluminium molding work.
Thoibi Devi who is 47 years old, used to work in one of such shops and learned the basic skills related to aluminium i.e. cutting, segregation, pressing etc. before carving it into various products. There are four members in her family. Her husband used to work as a school van driver..

Instead of working as wage laborers, Thoibi Devi and her husband wanted to do some kind of business. They wanted to do such business which would be complementary to the aluminium molding sector and where there would be few market players so that they would be earning more. She says, “For the people like us, making an investment in a business is a huge thing. We must have that futuristic vision so that our money does not go in vain. It’s better to invest where you see the opportunity and can make advantage as a first mover because opportunity doesn’t knock twice.”
Thoibi and her husband started aluminium scrap shop in the year 2005 by taking a loan of INR 7, 000 from a moneylender at the 8% p.m. interest rate. The business model in which they invested was very good and profitable, but the loan amount and its interest were so huge that they were not able to reap its benefits. She came to know about Chanura Microfin in the year 2010 by one of its ‘Karyakarta’. Understanding about the advantages of becoming a member of Chanura, Thoibi got associated with it and took its first loan of Rs. 5, 000. After that, she didn’t have to pay those huge interest rates and thus she started earning a monthly profit of Rs 30,000.
Her current business model is very simple. She provides the ready-made raw materials for the already crowded aluminium molding sector. She buys scraps from almost ten scrap collectors. She has small tools like press hammer, metal cutter, driller etc. With all these hand tools, her husband and Thoibi make small bundles of metal scrap and sell them to brokers. Unavailability of transport was leading to a loss of 20% of their income. Later in the year 2015, she bought a van for her business so that she could retain even that 20% of the income which she had to hand over to the brokers.
Chanura Microfin wanted to enhance the knowledge base of its women entrepreneur members so with the support of Friends of Women World Banking (FWWB), Ahmedabad, training on Financial and Business Management Skill was given to its borrowers in the year 2016.
Thoibi Devi also attended the both phases of training. She says, “Training proved to be very beneficial for me. I learned about the different parameters that needed to be taken care of before starting any business. I learned that market must be nearby your business so that one can easily sell their products. Customers’ need must be taken care of and income from the business must be invested into the business only and not for any different purposes. I have also learned the importance of savings and insurance. People become wise with training and now I am a wiser person.” At the end, she acknowledged by saying “Thank you for helping us to see the bigger picture before commencing any business.”